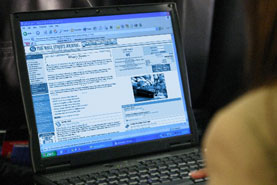 It’s not here yet, but in-flight wireless broadband is closer than ever. Verizon Airfone says that they expect to be able to offer the service starting in 2007. This optimism is fueled by the FCC’s ruling on the auctioning off of the 800MHz band, which is dedicated to commercial air-to-ground telecommunications. The auction is expected to take place early in 2006.

Verizon Airfone is an innovator in the in-flight communication field. They have been conducting tests since September 2004 of CDMA technology on flights which offers ground-to-air data transfer speeds of 2.4 Mbps. In June of this year, they received FAA approval to install cabin equipment that allows crew and passengers to use WiFi enabled devices in the air on domestic routes.

It is obviously too early for Verizon Airfone to talk about the price of the new service, though they repeatedly use the word affordable when describing it. Hopefully that means it is much less expensive than the in-flight phones are.