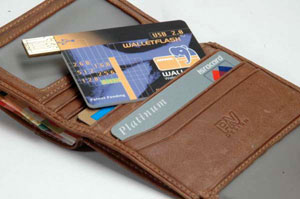 Flash drives are getting smaller and smaller, but it seems like everyone and their mother is releasing cigarette lighter shaped peripherals. Walletex has taken a slightly different approach, cashing in on the ever-popular “thin is in” mindset brought on by such products as Motorola’s RAZR. The company has developed the Wallet Flash 1.1, a credit-card-sized portable storage device that is actually credit card thin.

At CES 2006, the product was awarded “CES Innovations 2006 Design and Engineering Showcase Honoree” in the Personal Electronics category. And despite its name, the Wallet Flash 1.1 is compatible with USB 2.0. The functional LED indicator tells you if it’s in use, and it’ll run on a variety of operating systems, including Windows, Linux, and MAC OS.

However, the question remains, according to one commenter, “Can I sit on it? Credit card things are great until they break under 250 lbs of electronics-crushing, Whopper-eating geek.”