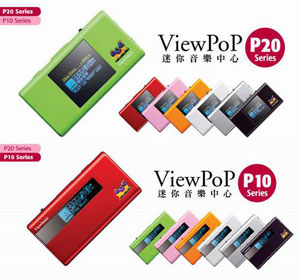 If Viewsonic were to release a portable device, you would think that the strength in the unit would be a clear, vivid and crisp display. Unfortunately the company has taken the opposite approach with their latest entry-level ViewPoP MP3 players.

No full-color screens will be found on either the new P10 or P20 series. Instead, the P10 has a monochrome blue OLED screen, and the P20 is less than top-tier with a blue-and-yellow OLED. Memory is mediocre with 512MB and 1GB varieties for both players. Feature-wise, the players sport the usual things like WMA support and a built-in FM tuner, and not much else. If you like using dry-cells, you might opt for the P10 and AAA batteries for up to 10 hours of life. If you prefer rechargeables, I suppose you can consider the P20 with its lithium-ion battery for up to 12 hours of playback.

The company intends to target the Asian market with the ViewPoP, so whether they will find their way onto North American shores remains to be seen.