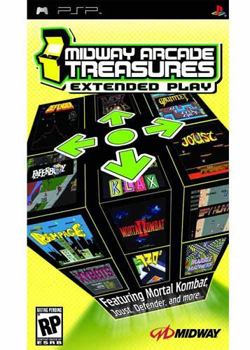 Mobile gamers grab your tokens; another classics compilation is making its way to the PSP. This time around, it’s arcade grand-master Midway’s turn with an anthology of 21 retro gems.

This is the publisher’s first foray into the PSP world and it appears to be a good one with a personal guarantee from Midway’s Chief Marketing Officer promising Midway Arcade Treasures: Extended Play to be the “perfect portable title”.

While the button-smashing set may scoff at some glaring omissions like Sub-Zero and Ultimate Mortal Kombat 3, the titles that did make the cut look and sound pretty good according to early reports. Video on the PSP is crisp and defined – more so than made for television versions and game speed is also rumored to be true to arcade.

Midway wants gamers to wake up Christmas morning to find a copy of Midway Arcade Treasures: Extended Play in their stockings. Stuffers can purchase the game at most game boutiques and online for about $30.