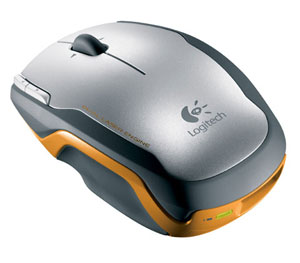 Logitech introduces the V400 Laser Cordless Mouse which is touted as a ‘high-performance’ laptop mouse you can use anytime…. anywhere. It boasts of two principal technologies, which Logitech promotes as the reasons why this new laptop mouse is apart from all other ‘mice’ out in the market today.

The Logitech V400 is the first mouse for notebooks that makes use of dual laser tracking. The technology was developed by Logitech and Philips Laser Sensors (it is based on Philips’ Twin-Eye Laser technology). The advantage? Due to the use of not only one, but two sensors, the new mouse is capable of providing pixel-precise tracking on a wide variety of surfaces.

The V400 is also a power-saving device; it automatically shuts down when the Micro Receiver is stored inside. And you won’t be caught by surprise as well and end up with a non-functioning mouse because a battery indicator light tells you when it’s battery is running low. To top off this mouse’s features, it also has a shock-resistant outer cover and rubber panels so you don’t have to worry about those accidentals bumps and falls.