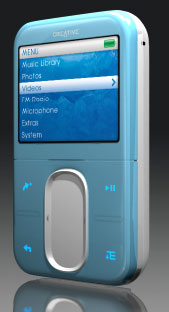 All is fair in love and war… and MP3s I guess. During the product launch of Creative’s Zen Vision:M MP3 player, company CEO Sim Wong Hoo indicated that Creative is planning to “pursue aggressively” any and all infringements on their beloved MP3’s patented interface design.

Let’s review dates a bit. Creative filed for a patent regarding its interface design for its Zen digital media players in January 2001, and was granted the patent on August 2005. Meanwhile, Apple Computer’s iPod was launched in later October 2001. Aha! The iPod was released to the market approximately nine months after the Zen MP3 player was out and so Creative seems to believe that they indeed have a right to seek legal action against Apple.

“We will pursue all manufacturers that use the same navigation system… This is something we will pursue aggressively… Hopefully this will be friendly, but people have to respect intellectual property”, according to Mr. Sim.

But what is Creative’s real purpose for such a bold statement? Many believe that Creative simply wants all the free publicity such a legal suit will surely create. In the interim, talks about a pending lawsuit will draw attention to its just released Zen Vision:M MP3 player. Once an actual lawsuit takes place, all the talk will bring Creative’s name to the forefront, and just maybe, they can get a bigger piece of the MP3 player market pie from Apple.