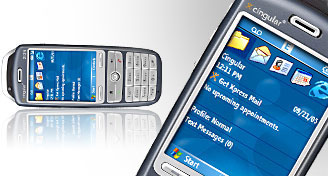 The HTC Faraday is already pretty well-known on the other side of the Pacific Ocean as a more than decent smartphone to suit most of your mobile needs. Well, the quad-band GSM handset is now being carried on our shores via Cingular Wireless, rebranded as simply the 2125. The Cingular 2125 runs off of the Windows Mobile 5.0 operating system, so all you PC users should already have an intuitive understanding of the interface.

All of the standard smartphone features are here. You get a decent-sized 2.2” TFT color display. You can play your favourite media files using Windows Media Player. The built-in 1.3 megapixel digital camera will record videos. Memory is mediocre at 64 MB SDRAM/64MB Flash ROM. As far as data transmission, it has Bluetooth connectivity as well as GPRS/EDGE high-speed support. However, unlike its “true” HTC Faraday counterpart, the Cingular 2125 will not have WiFi capabilities.

Tie yourself down to a two-year contract with Cingular, and the 2125 smartphone can be yours for $199.99.