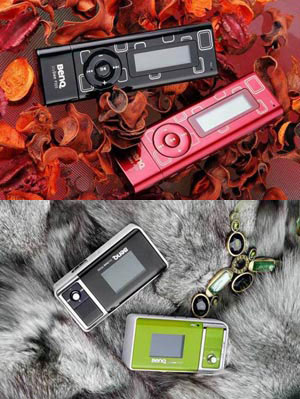 BenQ is not willing to bow out of the MP3 market just yet without putting up a fight, despite previous reports that the Taiwanese electronics maker was throwing in the towel. They are reasonably known for a number of different products, from LCD monitors to DVD-burners, and most recently; mobile phones, but their Joybee line of MP3 players was far from dominating the market.

That said, BenQ is jumping back in the game (or, I guess, jumping in the game, since they never technically left) with two new entries to their Joybee line. The Joybee P205 looks like the lovechild of the iPod shuffle and the Nokia 7280, but based on pictures available, you might be able to pick up some pretty colorful (including pink) versions of the player. The Joybee P330 is said to be video-capable, and again, should be available in a few different colours (including green).

Pricing and launch dates have not yet been announced, but it is possible that the P205 and P330 may only be released in BenQ’s home Taiwan.