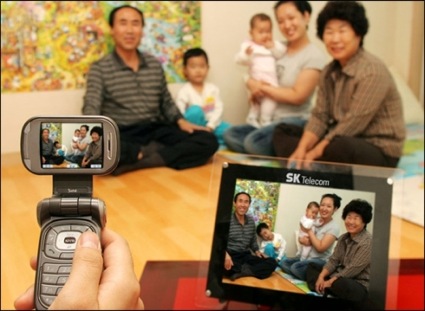 It’s good that I have a new reason to be jealous of the Koreans, because I haven’t had a reason for at least a day now. The idea of digital picture frames is a great one, but it’s a bit of a hassle to load your pictures into them. It’s certainly not a hard task, but it takes a few steps and isn’t quick. SK Telecom has done something about that with their LOView digital picture frame. It is a 10.4 inch 800×600 digital frame that comes in different styles.

So how does it make it easy to load content? Well, you can take a picture on your SK camera phone, dial *7777 and the picture will be loaded right into your frame. Presumably you could update your frame from the other side of the country. How cool is that?!? It happens because the frame has a 10/100 Mbps Ethernet jack to tie into your home network. The frame has 64MB of internal memory which can be expanded with memory cards. It even has MPEG-1/2/4 and DivX playback support.

No word on how much it will cost, but it will definitely be less than the plane ticket I am going to buy so I am can move to South Korea and play with all their toys.