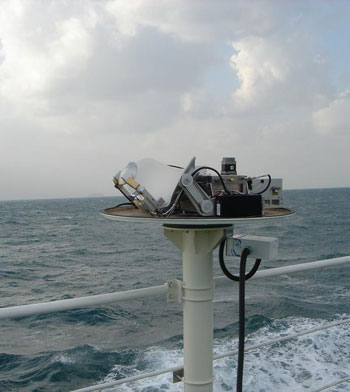 The next logical step in broadband is its implementation in moving vehicles. Sure, we can all take advantage of the WiFi hotspots we find at our local Starbucks, but what about when you’re on the move? Riding the subway perhaps. Well, ETRI, a Korean research institute, has developed a technology that allows for broadband, satellite broadcasting, and VoIP in vehicles moving at high speeds.

This is the result of three years of effort, according to ETRI. The newly developed satellite multimedia system provides some pretty impressive transfer speeds: a downlink speed of 80 Mbps, and an uplink speed of 4Mbps—-not too shabby if you’re riding a bullet train someplace. Looking at the image provided by TelecomsKorea, it seems like initial applications may be scientific or militaristic in scope, but don’t be surprised if the technology is quickly adapted to more civilian purposes.

It is said that they have not only reduced the size of antenna needed (which works with both Ku and Ka bands), but they have also improved the quality. Perhaps best of all, this current incarnation should cost only one-fifth the price of similar systems that are currently available on the market.