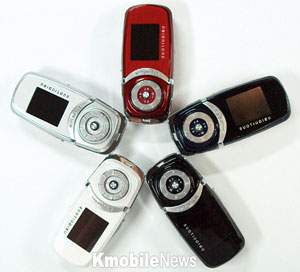 With a plethora of cell phones on the market that double as MP3 players, Altgen has taken an equivalent but opposite approach with its new PAN-300VT. The audio player communicates via Bluetooth with your mobile phone, so that you can not only receive calls through the MP3 player, but making use of voice-activated dialing (for example), you can also make calls. Altgen’s president, Song Jung-hyun, said, “Up until now, Bluetooth MP3 players could only receive wireless phone calls. But with our products, making calls is also possible.”

When a Bluetooth-enabled phone receives a call, it relays the call to Altgen’s MP3 player, playing the call through the headset. Adding to this, the player also keeps a list of received and unanswered calls, displaying them on its OEL display. You can also receive your SMS text messages through this handy little unit as well. However, because the PAN-300VT doesn’t have a keypad, you won’t be able to “dial” in a conventional sense.

“We plan to market this versatile gizmo in the local market later this month, with an affordable price tag of between $150 and $200, before breaking into the global arena next year,” reported Song. “I expect the items will hit the U.S. shelves early next year…After rolling out the merchandise in the U.S., we aim to expand its presence across the world by showcasing them in world high-tech fairs next year.”