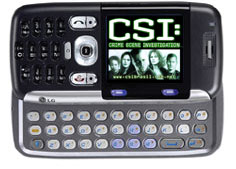 Not wanting to be left behind by their competitors, CBS is the latest network to jump into the mobile video business. They will be working with Verizon Wireless to provide clips of popular CBS shows. Unlike a few years ago, CBS now has several popular shows, including Survivor, David Letterman and all 33 or so different versions of CSI.

The clips will be available to subscribers of the Verizon V Cast video service. The move comes just days after ABC signed up to offer their content to iTunes. Unlike the ABC offerings, and because of the target market of wireless phones, CBS will only be providing short clips of shows, not full programs for download. You could, for example, download Letterman’s monologue, or a preview of Survivor or CSI. You will also be able to get breaking news and features clips from CBS Evening News, The Early Show and Entertainment Tonight.

Though there could potentially be some decent revenue from this for CBS at some point, that isn’t the point here from their end. It is seen as a way to attract new viewers and to provide alternative services for current viewers. For Verizon, this is a means of drawing in new users to their wireless video service, a segment with huge potential.