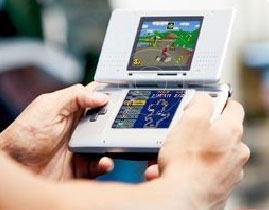 Nintendo’s Wi-Fi Connection wireless service available through the Nintendo DS is only three weeks old, but they have had 200,000 unique users so far. The service lets you play your games with other, well, game players. Obviously, you aren’t limited by locale with the service – you can play against your neighbor or some guy in the Philippines.

The 200,000 users have been busy. They have logged more than 3 million connections worldwide. That’s 15 times per user in just 21 days.

Nintendo is expecting the Wi-Fi Connection service to take off, largely because it is widely available and free to use. The company is signing new deals to expand the service, including a deal with McDonalds which provides free Wi-Fi connections in 6,000 restaurants across the US. Mario Kart DS was the first game to work on the Wi-Fi network, but more games are being added, which will obviously increase service use.