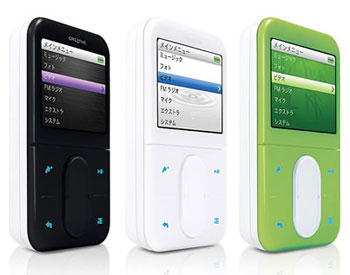 Creative is trying hard to take on the iPod. So much so, in fact, that the new Zen Vision:M portable media player looks quite a lot like an iPod. It has a 3.7” 320×240 pixel display and a 30GB HDD. The battery provides 13 hours of music or 3 hours of video on one 2 hour charge. It supports a full range of video and audio formats, giving you all the versatility you could reasonably expect. You can get it in black, white or green.

It does some things that the iPod, for whatever strange reason, does not. It has an FM tuner and a voice recorder. Where it can’t compete, though, is in size. It measures 62mm x 104mm, which is about the same as the iPod, but the 19mm is almost twice as thick as the iPod. The 166 grams it weighs is obviously more than the iPod, too. It just shows that Apple has a pretty big lead in mobile media player technology.

The player is being released in Japan. The black and green will be out mid-December and the white will emerge at the end of the month. The cost will be about $330. No word on when it will hit other markets.