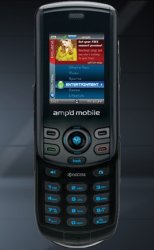 When Sprint launched their music store a while ago I cringed at the $2.50 per song download price. Amp’d Mobile, the MVNO which piggybacks on Verizon’s EVDO network and skews towards the young and hip, doesn’t think much of the price, either. The company is offering 200,000 songs for download at a more reasonable price of 99 cents per song. They even offer dual downloads – you can have the same song on your phone and computer.

It will be interesting to see how this plays out over the long term. Amp’d faces the same song royalty fees that Sprint does – $1.25 per song. Now, it has been several years since I finished my economic degrees, but I remember enough to know that 99 cents is less than $1.25. I also remember that selling something for less than you buy it for isn’t sustainable in the long term. That means one of two things – either Amp’d is hoping to make up the loss by drawing in lots of customers, selling the airtime that it takes to download the song and offering other, more profitable features or this offer won’t be around for long. Either way, this service launches on December 15, which is the same day that Amp’d rolls out.