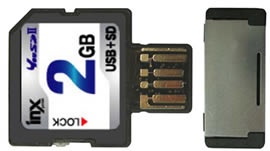 I see new USB Flash drives every day, SD cards aren’t news anymore either, but the YouSD II is the second time I have seen both things in one device. It looks and works like a typical SD card, but one side of the card can be removed to expose the USB connector, just like the Sandisk Ultra II SD PLUS USB Transformer Card launched in February.

The USB connector is plug and play, so you can use it on whatever computer you want without needing to install software. The unit has a transfer rate of 20MB/sec as an SD card or 17-18MB/sec via the USB. The sad part is that it only works with Windows.

The biggest challenge you will have with this device is making sure that you don’t lose it. Its only 32x24x2.1mm and it weighs just 2.1 grams. It comes with four different memory capacities – 2GB, 1GB, 512MB and 256MB. It will be available in Japan next week, but no word if or when it will be available in the U.S. Prices range from $65 for the 256MB model to $260 for 2GB.