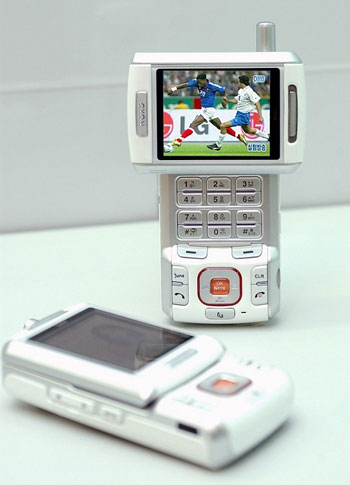 LG has unveiled two new phones. Don’t call them multimedia phones, though. These babies are super-multimedia phones. Details are scant at this point about the LG SB130 and the KB1300 (unless you can read Korean), but we do know enough to impress us.

The phones will allow you to receive digital TV and to record it for future viewing. You can play MP3s. There is a 2 megapixel camera with auto-focus for your picture taking pleasure and 300MB of built-in Flash storage. Obviously you will need more than that because of everything the phone can do, so presumably there is some sort of memory card that can be used. Oh yeah, you can make phone calls with the phone, too.

Like I said, that is about all we know about the phones. The race is fierce to put more features into every phone that comes out, so LG will likely tell us more about this soon. You know what else I am going to say, too – it is likely only going to be available in South Korea, so we just have to be jealous over here. We’re used to that by now.