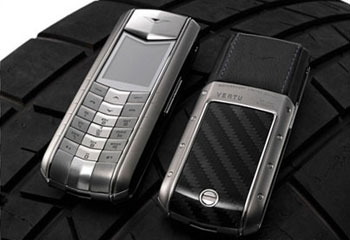 Ever wonder about the truth behind the outlandish marketing claims that companies make sometimes? Well, Vertu Ascent Motorsport has a limited edition cell phone that they claim “can withstand being run over by the very F1 Porsche the design was inspired from.” Well, the people at NY Times had a chance to try to call their bluff, except they drove over the $5700 phone with not the 1300-pound F1 racer, but with a run-of-the-mill 2800-pound Porsche Boxster.

The uber-elite phone may not have all the funky functions you’d expect from a higher-end phone, like Internet access, e-mail ability or a built-in camera, but what makes it special is that it is inlaid with carbon fiber, automotive leather, and the incredibly strong (and patented) Liquidmetal, said to be twice as hard as stainless steel. The phone also comes with a 24-hour international concierge service with the push of a single button: perfect for when you want to impress visiting business partners with a last-second bottle of Moet. Virtu even offers a signature collection of cell phones that are priced up to $32,000. Pick one up at your local Barneys, but hurry, Vertu is only planning to manufacturer 997 of these phones, each individually numbered.

Well, the NY Times drove over the nearly $6000 phone with a Boxster not once, but five times. On the fifth trial, just as the first, the sleekly-designed black-and-silver phone emerged unscathed. Not a scratch, dent or crack. Turns out, Vertu’s claim isn’t quite so outlandish after all.