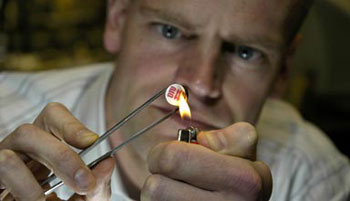 As someone who is admittedly not a chemist, I have to admit that I am confused about what to think about hydrogen. Mixed with oxygen it is very good. As a bomb it is very bad. When it comes to power it is the next big thing. That is, if they can make it work and make it safe.

Danish scientists may have just got me that much closer to cruising around in a hydrogen car, or even having hydrogen powered electronics, homes, the list is infinite. The problem up to now, apparently, has been that a big tank full of hydrogen is a bit like that bomb we were talking about. The aforementioned scientists have come up with a way to store hydrogen that is both cheap and safe.

“The technology is a step towards making the society independent of fossil fuels” says Professor Jens Nørskov, director of the Nanotechnology Center at DTU. He, Claus Hviid Christensen, Tue Johannessen, Ulrich Quaade and Rasmus Zink Sørensen are the five researchers behind the invention. The advantages of using hydrogen are numerous. It is CO2-free, and it can be produced by renewable energy sources, e.g. wind power.

“We have a new solution to one of the major obstacles to the use of hydrogen as a fuel. And we need new energy technologies – oil and gas will not last, and without energy, there is no modern society”, says Jens Nørskov.

The tablet is made from ammonia which is absorbed by sea salt. Ammonia is made from hydrogen and nitrogen. That means that the tablet contains a whole bunch of hydrogen. When the time is right, a chemical catalyst unleashes the hydrogen and my car of the future is safely heading down the highway. How do you like the sounds of that you oil hoarding bastards?

“Should you drive a car 600 km using gaseous hydrogen at normal pressure, it would require a fuel tank with a size of nine cars. With our technology, the same amount of hydrogen can be stored in a normal gasoline tank”, says Professor Claus Hviid Christensen, Department of Chemistry at DTU.