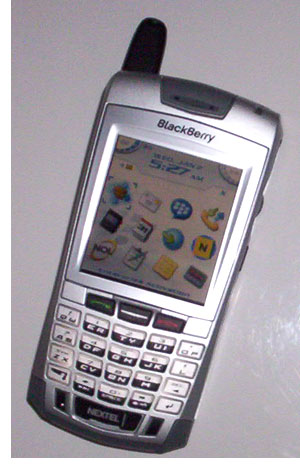 Since the first Palm Pilot came out, I’ve been drooling over ways to take all my information with me and be able to connect to other people via the same device. No, the first Palms and other PDAs were woefully deficient in their ability to keep me in touch. But then came the BlackBerry.

Let’s skim over the original clunky RIM (Research In Motion) brand BlackBerrys that were standalone devices using a sparse communications backbone for email and text messaging. Then let’s gun the engine forward to today as I sit holding a brand new, NEXTEL-branded BlackBerry 7100i.

The BlackBerry box came stuffed to the gills with

I may have just found the perfect way to leave my laptop at home when I travel. Instead of carrying around up to 12lbs of technology, I can load the 7100i with my info and then use it as my lifeline to the wired and unwired world. This device is topnotch.

Right out of the box, the BlackBerry is only three steps away from being ready to go. All you have to do is load the battery, charge it up and make sure the phone is set to your email account. The phone came with a SIM card loaded and started right up when I plugged it in.

If you’ve already used a BlackBerry for work or leisure, you might want to gloss over the next few sentences as I gush about how great this thing is.

Based on the booklet and everything I’ve heard about these neat communications tools, they’re so cool and functional that you’ll be floored! Everything I might need to do and everyone I might need to contact can be loaded into the 7100i and taken with me anywhere. The additional NEXTEL walkie-talkie feature is just a bonus.

As everyone says, and as nobody believes until they see for themselves, “You have to get one of these. Your life will not be the same.”

**Grain-of-salt moment: You can definitely enjoy more functionality by carrying your current laptop, a wireless-enabled phone and a PDA, but as more functions are jammed into the ‘smartphone-style’ PDAs and BlackBerry-type devices, your attaché of electronic goods will get lighter and lighter.

Additional first impressions were the stylistic touches on this Nextel/Sprint BlackBerry. It’s only a little larger than my current LG phone and the keypad looks easy to use, while the screen is full-color and large enough for even those folks who need ‘cheater’ glasses from the local pharmacy.

The BlackBerry, as mentioned, works on the NEXTEL/Sprint network and can operate as a regular cell phone, as a walkie-talkie, as an MMS device, as an email machine and as a Web access point (the browser window gets jumbled depending on the sites you visit, but you can still surf the ‘Net and enjoy unfettered access from nearly anywhere).

The 72-page manual is comprehensive and clear. It starts you right off with loading the battery and SIM card and then brings you right into syncing your files, contacts and using the phone and email functions. *As with most manuals these days, the last 20 pages are all disclaimers and legalese.

Finally, when you first set up the BlackBerry to receive and send email, your box immediately receives four emails that welcome you to the network and give you some helpful tips on typing and on managing your information – definitely a nice touch.

I am not a dolt. I’m an early-adopter of many technologies and gadgets, but the one thing I failed to jump on board with years ago was the BlackBerry. On some counts I am kicking myself, but on others I’m glad I waited. The devices are not so streamlined, functional and fun to use that I would have probably complained for two years if I had to keep a clunky, oversized BlackBerry in my pocket or briefcase just to stay in touch with the world.

As a phone, the NEXTEL/Sprint BlackBerry 7100i gets better reception in some spots than my Verizon phone. It features the walkie-talkie functionality of NEXTEL and the 7100i must have a stronger antenna than earlier cells because reception was good everywhere I used it. In fact, I just drove my father’s car to Florida from Boston and the 7100i got a strong signal the whole trip.

Some of the limitations you might face with a NEXTEL/Sprint contract seem to have been alleviated. In 2000, I had one of the first Sprint flip cell phones and if I was more than 42-feet from a major highway, the reception was ZERO. The combined networks have fixed this issue through a larger collection of towers and better technology.

Additionally, the handset fits nicely in its included holster, fits neatly in my small hands and is easy to listen to and speak into. It even has an extendable antenna for increased reception. I kept the phone volume on medium the whole time even though I constantly change the volume on my own phone depending on background noise and reception.

Coordinating your contact list, your information and your life. The BlackBerry does it simply and efficiently. Through the USB to USB sync cable, this puppy can grab your calendar, your phone list and other info right from your PC. Unfortunately, BlackBerry isn’t Mac compatible out of the box (Pocket Mac for BlackBerry required), but I’m still tempted to abscond with this device for all its other features.

It has a calculator, task list and even a game called BrickBreaker as nice other touches. In fact, if you were going away for a while and needed to remain connected to an office or to your appointments, you could do it with just this device. After a while the typing might get bothersome and the little screen could bug you, but you would certainly survive.

Internet and the Web are the two things this device handles that amazed me the most. I’m guilty of Googling myself and visiting my own Web sites frequently (helps boost traffic), so the first thing I did when I got the 7100i running was jump online and go to my sites. Just plain neat.

It was seamless. All I had to do was turn it on, select the icon that looks like the earth and type in my URLs. Maybe the most difficult thing was getting used to the two modes of typing offered on the BlackBerry – SureType or Multi-tap.

With SureType, you just type away and the device tries to guess the words you’re spelling. It’s entirely useless for Web addresses. When I tried to put in jeffcutler.com/jblog, I stymied the unit. No matter how I tried, it wasn’t going to guess my URLs. But, when using the Multi-tap method (and you can switch between the two with one button press) it was simple. Even symbol use is almost intuitive.

As for email access, it’s great. My parents’ house is on an island just off the coast of Florida. They only recently got high-speed Internet access and I’ve been unable to get my iBook to play nice with their connections down here so I frequently WiJack around the island to check my email. With the BlackBerry, I can sit by the pool and find out who’s trying to get in touch with me.

Just jump into the email (set-up takes only a few minutes) and you’re cooking with gas. Emails come right to your handset. I’m already trying to justify giving up my ordinary cell that only has text messages and picture messages. How can they compare to full-on Internet?

If you’re sick of me piling praise on the 7100i, here’s your comeuppance. The only drawback to having the Internet in your pocket is price. As with any cellphone or Internet plan, access costs money. But if you’re going to spend money on a cell and use it for wireless Web and/or extensive text messaging, go the whole way and get a BlackBerry.

I found the 7100i easy to use, fun to set up and a great way to stay in touch with civilization while away from my office. It sells right now for $199 through Sprint Nextel.