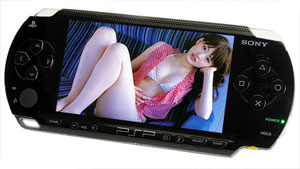 Sony has launched a Portable TV network in Japan, but the news isn’t quite as exciting as it sounds. In their relentless pursuit to make the PSP do everything, Sony has seen the next logical step to be TV. Good call. Makes sense. It’s just that the execution is odd. First of all, its just a download service. Sure you can download full episodes of recent TV shows to your memory stick and enjoy them on the PSP on the go, but that isn’t really portable TV, is it? Besides TV shows, there will also be music videos, movie trailers and other video content.

The other odd feature of the service is that it is only a rental service. You pay $1 to $3 per program and download it to watch it. After a week or two, though, the content will no longer work. My excitement diminishes with every new twist in this story.

Since it is being launched in Japan, the content is, shockingly Japanese. It includes popular shows and anime offerings as well as my personal favorite – Private Princess: Ayase Haruka, a “highly intellectual” photo shoot. Maybe this whole thing isn’t such a bad idea after all.

The service is now available in Japan. Now word on if and when the service will expand to other countries.