Phillips, hot on the heels of their “innovative” Ambilight technology, announced that they’re shifting their focus slightly and are going to aim at gamers for another application of their visual witchcraft. They’re dubbing this incarnation amBX – pronounced am-bee-ex.

amBX will not only feature the technology behind Ambilight, but will incorporate “active furniture,” fans, heaters and audio/video to completely envelop the gamer in a “sensual masterpiece” (well, I made up that last quote).

Aimed initially at the PC gamer, Phillips believes that this has what it takes to take gaming to the next level. It will use scripted events that will be programmed into games, and these will interact with the peripherals you have “strategically placed” around your gaming environment. Phillips will be working with peripheral manufacturers and game developers to get this technology all in sync.

How successful and widely adopted it will be is to be seen of course. But if you can even help but think of the movie theatre experience that some “enjoyed” in the 1950’s (see the movie Matinee if you don’t know what I’m talking about), you are a better man than I. There’s a reason we don’t see this in modern cinema, but of course stranger things have happened. 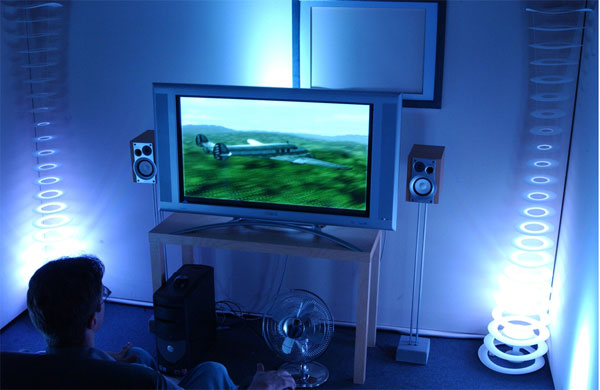