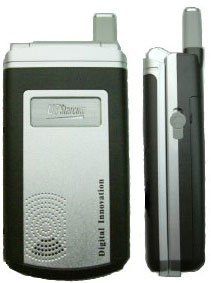 Although the details are still a little sketchy, it looks like UTStarcom’s new VoIP phone just might be available for purchase by mid-December. But only if Vonage quits messing around, they need to fix their E911 services for customers or the FCC will ban them.

The retro-cell designed F3000 WiFi VoIP phone will hopefully be pickced up by mid-December. It’s basically a newer version of the F1000, comes in a clamshell design, and will work over any compatible 802.11b/g network.

The 65K color 128×160 LCD screen should offer some good legibility and ease-of-use. It was reported by Tom’s Networking that UTStarcom’s latest VoIP phone will be fully SIP compliant and will introduce WPA/MD5 authentication, though neither UTStarcom nor Vonage have confirmed either of these tasty details.

Official pricing has not yet been announced, though voipsupply.com is taking $210 pre-orders for UTStarcom’s F3000 WiFi VoIP phone.