Playstation Portable wall art (read: graffiti) is popping up in cities across the U.S. and the locals don’t like it. Sony denies funding the graffiti-ad campaign, but obvious similarities make it a hard point to argue.

While guerilla marketing is nothing new, the sudden appearance of almost identical high-quality, PSP-playing characters from coast to coast have enflamed residents of New York, Philly, Chicago, San Francisco and Los Angeles.

Again, Sony denies playing any hand in these various pieces of illegal art, painted onto public and private property. But the locals aren’t fooled. They’re angry. 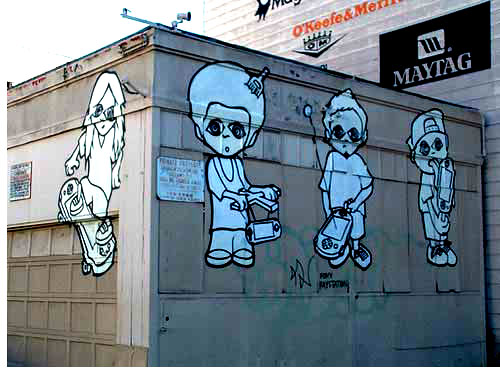 To many, it has less to do with the defacing of neighborhood sidewalks and buildings and more to do with big business hijacking a very un-corporate medium to sell product. And Joe Citizen is not taking it lightly.

As one irate blogger wrote: “For some strange reason, I’d rather see my friendly local gang lay claim to that wall then have it given over to some crappy corporation and their urban marketing campaign.”

“It’s quite obviously an advertisement, but when I called Playstation Consumer Services this morning, they claim to know nothing about the campaign. I guess there’s just some clever youngster out here in LH [Lincoln Heights] that just really LOVES the PSP and wants the whole world to know about it…”

If this is a first time tag from the artist in the area, then it would very much appear to be a Sony sanctioned job. Nevertheless, Graffiti is graffiti, you don’t know who did it unless the artist wants you to.