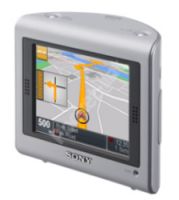 Sony hasn’t taken the GPS market by storm, but that doesn’t mean that they have quit trying. In fact, they have unveiled two new models in their Nav-U GPS line, the NV-U50 and the NV-U70. Both models have a 3.5 inch touch screen and an 80 degree viewing angle.

The NV-U50 is the entry-level unit. It will feature maps of the UK, Ireland and parts of France. There is also an optional traffic version, the NV-U50T, which will re-route you around traffic problems automatically.

The NV-U70 comes with the traffic support standard. It has a 1GB flash memory drive that allows it to store maps for most of Europe. This is also the first GPS in the world to have a two-way speaker, with a woofer in the back and a tweeter in the front.

The Nav-U line will be available in Europe in January. The NV-U50 will be $550, or $770 with the traffic function. The price for the NV-U70 isn’t available yet.