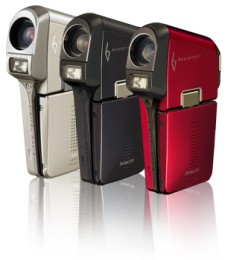 Two new Camera’s are going to be released by Sanyo in 2006, the Sanyo C6 and the more affordable Sanyo C40. Both are capable of taking video in MPEG4 and Hi Res digital images, all in a stream lined little package.

The C6 (pictured) is reportedly “The World’s Smallest Camera”, like we havent’ heard that one before, but it sure does pack a punch. While you are recording your son’s first steps you don’t have to worry about the lighting or the fact that you’re shaking with joy, it has a digital stabilizer and 9 megapixel mixture technology which is great for low lighting.

The digital picture quality is going to be just as rich as when you take those pictures at 10.2 megapixel.

Now, the C40 is being released a little bit later in the year, but for those of you that cannot dip that far into your pockets, this may be a really good bet.

The digital quality is still up there, with the C40’s 1/2.7” 4.2 megapixel CCD, you can shoot VGA size video clips and the digital pics are at 4 megapixels.

Even though the monitor on the C40 is a bit smaller at 1.8 compared to the C6’s 2.0 for $399, you cannot go wrong either way. Both will use SD cards for recording memory.