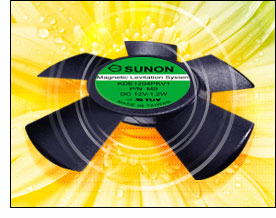 Bet you don’t spend a lot of time thinking about the fan on your laptop. When news comes out that the leading manufacturer of fans is dramatically increasing production, though, it is interesting. It is a sign of health in the sector.

Sunonwealth Electric Machine Industry Co. Ltd. (that just rolls off the tongue), aka Sunon, is the largest maker of fans, producing fans for one in three laptops. They will be increasing monthly production by 26 percent next year. That means that they will be making 10.7 million fans per month in their two Chinese factories in 2006. To do so, they will be raising $15-$20 million, so if you have a few bucks sitting around, let them know.

The company is basing the decision on faith in economic growth in Japan and the U.S. and the move away from big desktop machines to portables with all the gadgets.

Sunonwealth has secured its market leading and highly profitable position through innovation, spending 6.5% of revenue on research and development. Incredibly, the company holds more than 800 patents.