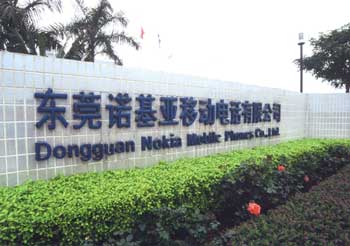 Finish mobile phone maker Nokia is beefing up its handset production facilities in China, to increase output and feed the world’s growing appetite for mobile technology, the industry giant announced on Thursday.

The company plans to invest in doubling the floor space at its Dongguan factory and will start accelerating production later next year. This means hiring 800 more staff to bring the total operation to just around 2000 workers.

Nokia spokesperson Eija-Riita Huovinen says it will cost Nokia about $14 million to expand the Chinese facility, but wouldn’t divulge any details of how big the actual area will be: “It’s quite significant, because space-wise it will almost double the area.” Significant indeed.

China has a voracious hunger for mobile phones, selling about 100 million handsets a year to almost 380 million Chinese subscribers – a number Nokia expects to rise to 250 million subscribers by 2010, in spite of competition from Motorola and local rivals.

Nokia has spent more than $2.2 billion in China over the past 20 years, delivering a substantially healthy return on its investment. Between China, Taiwan, Hong Kong and Macau, Nokia sold 23 million handsets in the first 9 months of 2005 – an increase of 77% from the same period a year earlier.