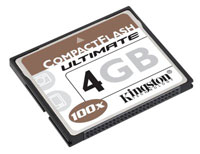 There are a couple of things that can make a memory card more attractive: more storage space and faster read/write speeds. Well, Kingston has addressed both of these factors with the announcement of their new “Ultimate” line of Compact Flash cards.

The sustained write speed is rated at a whooping 100x (13mb/s read, 13mb/s write) for all three versions of the new CF card. What this means is super fast recording, with short intervals between shots. The increased storage—coming in 1GB, 2GB, and 4GB capacities—is perfect for all of you photobugs out there who don’t want to miss a moment, would like the ease of continuous shooting for an extra long time. It will even be liked by pros, where it will fully utilize your DSLRs burst capture rate, without slowing the cameras buffer down. Kingston offers a lifetime warranty and 24-hour support on the cards.