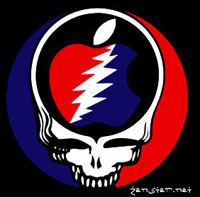 The Grateful Dead has long been known for allowing fans to record and tape-share live shows. So when the band asked Internet Archive to halt the free downloading of bootleg concert recordings, peace-loving deadheads everywhere reacted.

The band sells music and video at online retailers like Apple iTunes. However, because free sites like Internet Archive cut into the band’s profits, the Grateful Dead demanded a halt to the free downloads.

The Dead had an enormous following; setting attendance records everywhere they played and generating millions and millions of dollars in revenue. Following the death of Gerry Garcia in 1995, the legendary touring band called it quits and slowly began relying on music and merchandise as their main source of revenue.

But the Dead was swayed by its fans, who petitioned the band to live up to its legacy of tape trading:

“The internet archive has been a resource that is important to all of us,” states the petition, which also threatened a boycott of Grateful Dead recordings and merchandise. “Between the music, and interviews in the archive we are able to experience the Grateful Dead fully.”

Direct soundboard recordings are still legal property of the Grateful Dead and can be purchased from iTunes or the through the band’s website.