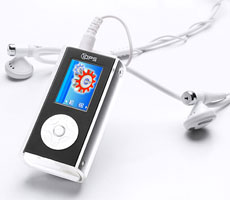 Apple is protecting their iPods from being knocked off, but they are kind of being bullies about it. Iops is only the fifth largest MP3 player manufacturer in Korea, but Apple has chosen to take them on before they take on bigger companies in other countries who create MP3 players that look suspiciously like an iPod. Apple has officially complained to Iops and asked them to stop making and selling two models, the Iops Jock and Iops Z3, which copy the look, color and control button of the iPod mini. Iops refuses to do anything until a lawsuit is filed.

I say that Apple is being a bully because, well, they are, though they are obviously entitled to protect their products. They don’t just want Iops to stop making the products, but they also want to be compensated for lost sales and they want official apologies printed in several South Korean daily newspapers.

Apple controls just 8.6 percent of the market, well behind the 41.5 percent owned by the iRiver and also behind Cowon’s iAudio and the Yepp from Samsung. Iops has 1 4.6 percent market share. The Iops Jock offers video capabilities, FM radio and voice recording, which the iPod mini couldn’t give you.