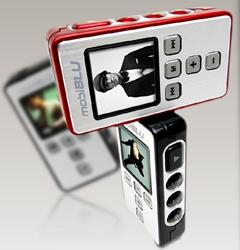 Most people listen to their MP3 players while riding on the subway on their way to school or work, atleast that’s how it’s done in most metropolitan cities, Korea in particular. Recognizing this, MobiBlu has launched a version of its DAH-1800T digital audio player that incorporates the RFID smart card used on the Korean public transportation system.

Normally, you’d have to take your card out and swipe it across the appropriate reader before boarding the train, but if everything goes according to plan with MobiBlu’s new unit, you can still blast the tunes while just rubbing your pocket against the reader and continue on your happy little way. Just don’t let anyone catch you having a little too much fun with the turnstiles.

This is certainly an interesting innovation on the Korean manufacturer’s part, now they just need to integrate a mobile phone, and some games on the thing and maybe it’ll fly state-side. Then again, what might be even better is if they can make a device that’ll toss money in the coin-box for me when I board the bus.