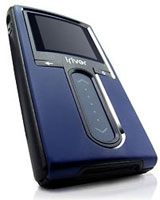 When the news hit that Microsoft’s Xbox 360 would play all kinds of audio, everyone got excited at the prospect of hooking up their 20, 40, or even 60GB Ipods to the new gaming system. Then, unfortunately, we all found out that the Xbox 360 won’t play protected content. Well, iRiver has come to the rescue with their H10, the first device capable of streaming PlaysForSure content through the Xbox 360.

With a simple firmware update to the iRiver H10, you can easily connect the player to Microsoft’s next-generation gaming console and stream hours of music on end. It’s a little strange that a firmware upgrade is even needed for the H10, considering that the PlaysForSure DRM standard was Microsoft’s to begin with.