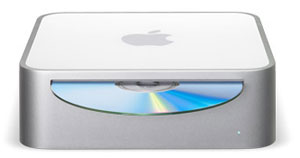 The Mac mini is getting a facelift, even though it is only a year old. Since it hit the market customers have been attaching the small unit to their home theatres and sticking them in their cars. People want a media center, so Apple is giving them a media center.

The new incarnation of the mini is codenamed Kaleidoscope. It will have an Intel processor, though the speed is unknown. Of bigger interest, it will have both Front Row 2.0 and DVR functionality. Rumblings around the project are that the DVR functionality is poised to be a TiVo killer.

The Mac Mini now has a 2.5-inch hard drive, but the new version is rumored to contain a standard 3.5 inch drive. The new drive will increase storage capacity and decrease costs at the price of increased size.

Not surprisingly given the media center focus, the new mini will likely contain a built-in dock for the iPod. Other hardware specifications are unknown, but that won’t stop people from speculating and dreaming.

Word is that the company will unveil their new mini wonder at Macworld Expo 2006, which kicks off in San Francisco on January 9.