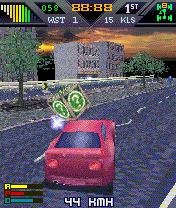 In a pleasantly-worded press release, Kayak Interactive announced today the release of Carmageddon 3D for mobile phone handsets. A game that ultimately pits you and your car against everything and anything on the road – including pedestrians.

Earlier this year, a 2D version of the popular driving PC title was released for mobiles, but with new advancements in cellphone technology, a 3D version was created. For newcomers, the Carmageddon series offers a “high-octane” mix of street racing and destruction of property (both public and personal).

Graphically speaking, Carmageddon is between average and good, running a decent FPS (frames per second) ratio and has multiple camera angles to choose from during play. Sound is equally average. It’s the Gameplay that makes Carmageddon 3D Mobile worth looking at.

Comprised of a number of mini-games, Carmageddon features all the signature carnage and destruction, complete with a point-based championship series that unlocks new challenges as you move up the ranks. There is also a single event mode. There are six mini-games in total including a standard race, time trial, keep the flag, and destruction derby to name a few – all against 3 AI vehicles.

Controls are reported to be a little tricky to master – braking and cornering are two particular challenges. In all, Carmageddon 3D offers much in the way of content, keeping you busy, say in traffic, for hours and hours of fun.