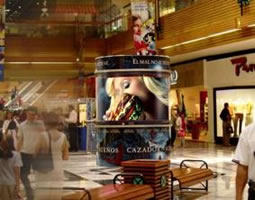 You’d have to have a huge living room, but the new LED display from Dynascan would guarantee that you would have the coolest home theatre ever. The Taiwan-based company has unveiled their third generation 360 degree screen which they have been working on for years. They are definitely not built for portability, since the latest generation measures 2.5 metres high with a circumference of 5.46 metres. They can be seen clearly from 30 metres away. The resolution, color, brightness and sound quality all exceed that of conventional LCD or Plasma screens. The display is currently used for advertising in malls and public areas. An outdoor version is also available.

The screens can display one image around the entire 360 degree range. That means that a 360 degree camera could be combined with the display to really blow your mind. Usually they are used with three 120 degree images. For you non-math majors, that means that the same image appears three times on the screen.

The 360 technology is used throughout the world. It’s increasingly being embraced by major advertisers. The new generation should only increase the display’s use.