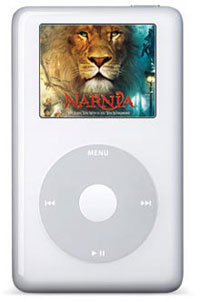 It was only a matter of time until someone figured out a way to advertise to you on your iPod. Disney and radio conglomerate Clear Channel are the first major media companies to promote their wares on the devices.

Disney isn’t new to iPod content. Many of the shows from their ABC network are available for download from iTunes already. They are expanding their use of the medium, though, by giving away content. You will be able to visit the official website of Disney films and download trailers, clips, interviews and other content for your iPod. The Chronicles of Narnia will be the first film for which content is available.

It is a bit more surprising that a radio company is using video. Clear Channel will be offering 60 second video clips of the Rush Limbaugh Show radio program to entice people to subscribe to Rush 24/7, a streaming and podcast service.

The rapid growth of video downloads and the popularity of mobile video means that this is just the beginning. According to Boyd Peterson, a sector analyst, “The larger trend is the combination of using the Internet as an advertising vehicle and then portable devices as a way of extending that presence.”