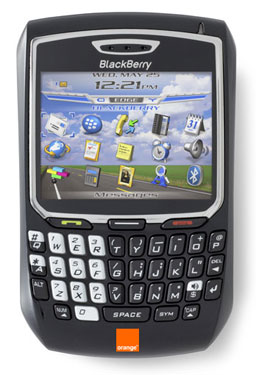 The BlackBerry 8700f will be launched in France in partnership with Orange France and will leverage the EDGE network that Orange already has in place. It will be the first EDGE-enabled Blackberry handheld in Europe, the 8700f is identical to the 8700 models that have been released by Research in Motion in Canada and the U.S.

“We are pleased to partner with Orange to launch the BlackBerry 8700f in France,” commented Mike Lazaridis, President and Co-CEO, Research In Motion. “The new BlackBerry 8700f was engineered to provide the ultimate balance of performance, design and function and Orange’s high-speed EDGE network will allow customers to experience the full potential of this device.”

The BlackBerry 8700f from Orange is equipped with a powerful Intel PXA901 processor that incorporates the latest technological advances in wireless communications and features 64 MB of flash memory and 16 MB of SRAM. As a result, users experience significantly faster Web browsing, application performance and attachment viewing as well as larger application and data storage.

To be released in France on December 15, the BlackBerry 8700f will continue to be released throughout the Orange network in Europe during 2006.