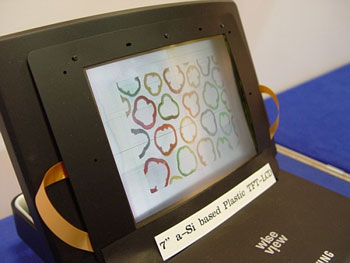 Samsung Electronics today revealed that they have developed the largest flexible thin-film transistor liquid crystal display, the 7-inch TFT LCD can display resolutions of 640×480 (VGA) and is made of a transparent plastic substrate which is lighter and more durable than conventional LCD glass panels on the market now.

This is being considered the next-generation in flat panel technology, Samsungs pliable plastic is much easier to handle, allowing greater versatility in designs over rigid glass substrates. The technology will be best used for on mobile phones, notebook computers, PDAs and other mobile devices. Think of the possibilities for wearable electronics, manufacturers will be able to wrap or bend the LCD around the wearers garment making a comfortable and discreet device.

This display is double the size of Samsung’s 5-inch prototype flexible LCD announced at the beginning of this year.

“With this advancement, Samsung has overcome daunting problems involving the plastic substrate’s heat sensitivity including a previous challenge to maintain the display’s substrate thickness when subjected to typical commercial thermal conditions. Samsung developed a low-temperature processing technique that can be used to manufacture the display’s amorphous thin-film transistors, color filters and liquid crystals at process temperatures much lower than standard glass-based, amorphous silicon (a-Si) technology.” Samsung noted in a press announcement today.