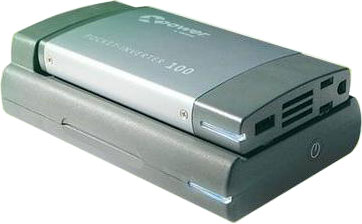 If the batteries in your portable devices are constantly running out before you get home where you can charge them, then the XPower Pocket Powerpack 100 is just what you need. Manufactured by Xantrex Technology, a Canadian company, it is a combination power inverter and battery pack. You can use it to recharge your portable devices on the go, or you can run them straight off the unit as well.

The Powerpack weighs about 2.4 pounds. It is small enough to fit in your laptop bag and has enough juice to recharge a Blackberry 30 times, an iPod 20 times and a cellphone at least 8 times. It can also run a laptop for about 2.5 hours without being plugged in.

The XPower Pocket Powerpack 100 retails for $119 and is available from select retailers in North America, including Radio Shack, West Marine and online at www.xantrex.com/buy.asp.