ESPN wants to make it easy for sports addicts on the go to get their fix by having a full-fledged ESPN Mobile cellphone. According to the unbiased opinion of the company, the phone is “The Greatest Invention in the History of the World. Ever.” I’m not sure of that, but it is pretty cool and will be available beginning today, a bit sooner then most anticipated.

The phone will let you know when your favorite teams scores and then send you a highlight of the play while the game is still on. They are able to provide the sports content faster than other providers because of an aggressive decision they made. They have negotiated with all of the major sports leagues in North America to secure their cellphone video rights. They have even done this for leagues, such as the NHL, that they don’t show on the TV network.

Analysts point out that this is the first “really big” brand name to create their own phones. It will give them an advantage over potential competitors, but they have problems to overcome first. Developing content that is appropriate for viewing on the phones is the first hurdle. Some traditional sports highlights just don’t work on the small screen format. For example, Michael Cupo, an ESPN technical producer, said “high and wide game shots look terrible on phones.”

The phone is a rebranded Sanyo MM-9000, currently available on Sprint’s EV-DO network. It will cost you $400 to score one of your own. They are available now online from ESPN and will hit stores in February. 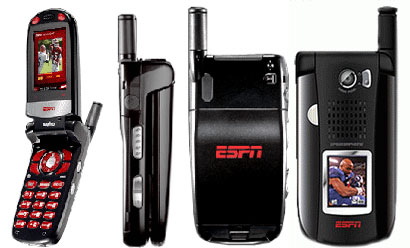