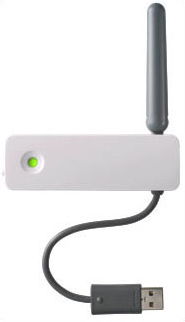 Well, you’ve already dropped well over $500 on your brand spankin’ new Xbox 360 and are playing with people all over the world using the Xbox Live service. Why not spend another $100 to get that “dream machine” hooked up to your wireless network and get rid of those hideous wires?

You can get other wireless Ethernet bridges for less, but then you wouldn’t get this cool looking (and smaller) unit made especially for the Xbox 360. The Wireless Network Adapter plugs into the Xbox 360’s USB port, connecting you to a world of options, allies and rivals.

The stylish Xbox 360 Wireless Network Adapter is currently available from various retailers for $99.99, but of course, this is all a moot point if you don’t already have the game console. Xbox 360 bundle availability, even one of the more extreme ones that come with 4 wireless controllers and 7 games, is few and far between at this point, but should become plentiful by the time Sony’s offering, the Playstation 3, hits markets early next year.