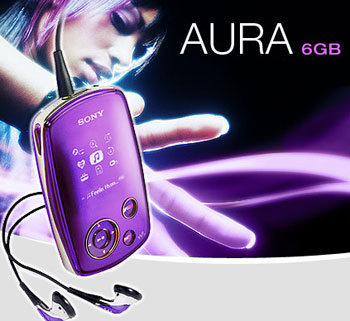 If you are a fan of Sony products, you have probably heard about the new NW-A1000 and NW-A3000 MP3 players. They have 6GB and 20GB HDDs, respectively, and they look good and sound better than the average player. They are made of a translucent material and feature some interesting features, including a couple of shuffle modes that are based on your 100 most played songs, or all the songs from one year, that sounds like a lot of fun.

They were first released in Japan as you would expect. Recently we heard that they were also being sold in Europe. We figured we would have to be patient before they hit the States. Now, to add insult to injury, word is out that they are being sold in Canada under the name Sony Aura. The 6GB model costs $299.99 Canadian and the 20GB model can be pre-ordered for $349.99.

There is no word yet when they will be available in the U.S., but this could be a reason to hate the Canadians if you were looking for one.