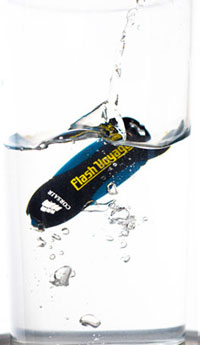 Corsair has released a new addition to their Flash Voyager line, the 4GB USB 2.0 Flash drive, we took a look at the 512MB version early this year so we know it kicks ass and can withstand all the elements. This was the first drive to feature an all-rubber housing, meaning that it can hold up in extreme temperatures, isn’t bothered by physical abuse and is water resistant. Corsair gives you a full 10-year warranty, so it’s perfect for hardcore computer users.

The Flash Voyager has a security feature which allows you to set up a password-protected partition on the drive. It reads at 19 MB/s and writes at 13 MB/s, so it’s fast enough to keep up with you. It has dual channel technology, this allows for twice the interface width between the Flash and the controller, meaning it can read and write with twice the performance.

The drive is available now at a cost of $259. If that is too steep or you don’t need 4GB of storage, there are still five smaller sizes.