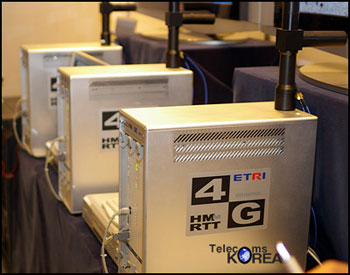 If you are excited about 3G, then 4G will blow your mind. A 4th generation telecommunications wireless transmission system was unveiled and demonstrated at a trade fair in Seoul on Thursday by the Electronics and Telecommunications Research Institute.

The system that was demonstrated allowed data transmission speeds at 100Mbps at a standstill, and also allows for transmission while moving at speeds of up to 120 km/h. That’s just the beginning of the potential, though. According to Byeong-Ho Yoon, a senior engineer, “In the coming 2010, it will be possible to send and receive wireless data at the speed of 1Gbps while not moving, and 100Mbps while moving.”

This demonstration comes one day after DoCoMo announced that they have achieved real-time packet transmission of 1Gbps at a speed of 20 km/h in a field experiment. The test was conducted in May. The success of these tests, and the competition to be leaders in the development of the next generation wireless protocol should increase the momentum of 4G.