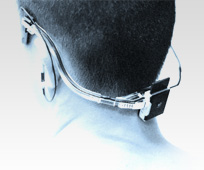 Likely a developmental offshoot of Apple’s iPod Shuffle and the other flash-memory music drives now available, the S4 Styles Co. MMR1 is a minimalist approach to enjoying your music practically anywhere.

When I first saw the futuristic curve of the integrated headband, I thought of Jordi on Star Trek’s The Next Generation series. But don’t let yourself be misled by visual cues; this tiny music device has a lot more in store than its size might indicate.

**An SD or MMC card is not included in the package, so you will need to supply your own. I put a 128MB SD card in my model.

Right out of the box, this little device was impressive. It weighed nothing (approx. 23grams) and the cool plastic headband fit me perfectly. The box stickers were clean and utilitarian with just enough information to say what’s inside without bogging you down. And the neck strap was tucked away neatly in its own baby zippered bag.

I was immediately puzzled on how to work the device as the controls are limited to two buttons – one knob/button on the front and a power/equalizer button on the side.

Additionally, the light plastic seemed a bit fragile if you plan to wear this puppy while boarding, biking or jogging, but it seems just right for the office and for more casual pursuits.

The rubber covers for the card slot and the USB plug were not perfectly fitted, but my test model may have been a prototype and these touches are typically not finalized until the production version.

Finally, the ear buds lacked the little foam covers you see on other headphones – slightly disappointing for anyone who wants a little touch of comfort instead of hard plastic jammed in their ears.

The MMR1 supports MP3, WMA and ASF files all via an SD or MMC card. The slot is right in the top of the player, but is unobtrusive and convenient. You can load music directly via the MMR1 or use any card reader to fill your cards with sound. The directions don’t put a limit on the size cards supported, but as this device is solely a reader, I expect that you could use any of the common sizes now available, up to even a 1GB SD. 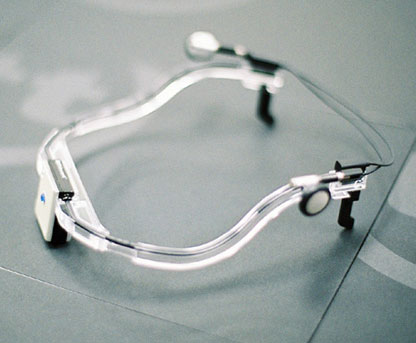 As I mentioned, I was puzzled at how I would coax music from this tiny box via the two buttons. Well, it’s easier than my iPod to play.

The button on the side has a window next to it that tells you what state the battery is in and also what type of sound quality setting you have chosen. The LED can be green, red or orange indicating the charge remaining. A green steady light means the battery is fully charged. An orange light means it’s at mid power. And a red light means the unit needs to be recharged.

During charging, the red light blinks once a second. The unit also uses a few other blinking lights to indicate equalizer settings.

To start it up, just press the side button for a little more than a second. You should immediately hear your first song in the ear buds. The control in the front of the MMR1 is like a PlayStation joystick. You can push it in any direction and it also can be pressed in vertically.

Press it vertically to start and pause play. Push the little stick up or down for volume control, and left and right for choosing tracks, rewinding and fast-forwarding.

In all, once I had given the device a little charge, I was using it in seconds. It’s an easy interface to understand and to learn. By reading the book, I learned how to shuffle my music and how to read the LEDS.

To load your music up, you don’t need any special software, just drag music files to the card. MMR1 supports bit rates of 8 to 320 Kbps and works with a USB 1.1 port. The equalizer has settings of normal, rock, pop, jazz and classical, but I couldn’t tell much difference between them. All the settings other than normal sounded the same.

Unit is 32mm x 35mm x 14mm. Plenty small to almost fit in the coin pocket of your jeans. And the reported battery life of 12 hours is slightly longer than the effective time that I got from the MMR1, but I didn’t charge my unit completely before taking it with me around town doing errands.

I’m completely taken by the minimalist design, the clear sound that comes from such a tiny device and the ease of use. It’s ingenious to use our common cards (same ones we’re all using in GPS’s, digital cameras and storage drives) to sort, store and play our music.

On the down side, the unit struck me as a little fragile and both times that I loaded it with music and unplugged it from my Mac, I had to poke a paperclip into it to restart the unit. This didn’t affect anything on my card and the MMR1 started right up, but it was a tiny annoyance.

For the money, the MMR1 could be a little more solid, but it’s great as lightweight MP3 player when you don’t feel like lugging something a little more clunky around.