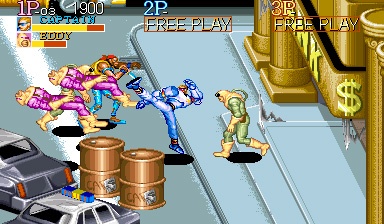 The golden age of arcade videogames is back, again, with Capcom Classics Collection Remixed for the Sony PSP. This time around, it would appear that Capcom got it right – with better titles and a slew of new features to make this version worth looking at.

When Capcom’s Classics Collection first appeared for consoles, missing were a handful of hot retro titles that made the publisher a household name – Street Fighter, Strider and 1941 to name a few. This scaled down version’s got them and 17 more retro classics to have you button-smashing, just like the old days.

The PSP version has 20 titles, two less than the original anthology. Of these 20, at least half of the games on the PSP version of the collection will be new, including Avengers, Block Block, Captain Commando, Magic Sword, Quiz and Dragons, Three Wonders, and Varth.

As mentioned, Remixed is feature-rich. Supporting full network functionality; PSP’s wireless ad hoc mode will let gamers join multi-player (MP) games at anytime – no waiting, no lobbies. Gamers will also be able to share high scores to and from other systems during these MP sessions.

Get your hands on Capcom Classics Collection Remixed around March of 2006 wherever you buy your games. A full list of titles is available on Capcom’s press release.