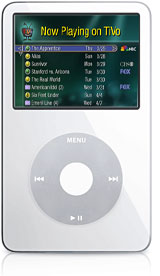 TiVo has just announced that it will soon be testing software that will enable its subscribers to move recorded TV programming to Apple’s iPod or Sony’s PlayStation portable (PSP) gadgets.

TiVo mentioned that it will begin such testing in the coming weeks. Most likely, the new TiVo feature will be available to “stand-alone” TiVo Series2 consumers as early as the first quarter of 2006. This indicates that current TiVo subscribers will NOT have access to this new feature.

The testing involves the purchase by TiVo of special software that will convert the TV programming into a file that is compatible with either the iPod or Sony’s PSP. At the moment, only three primetime TV programs are downloadable to your Apple iPod Video – “Desperate Housewives,” “Lost” and the recently concluded “Night Stalker,” each downloadable episode costs US $1.99.

What about copyright issues? The media files will be watermarked and traceable to originating computers to prevent piracy.

So why the move? “The increasing popularity of mobile devices for viewing video such as Apple’s (Research) iPod and the PSP device demonstrate the enormous consumer demand for entertainment on the go,” says TiVo CEO Tom Rogers.