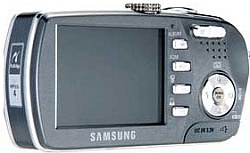 Well, you can’t blame them for trying. Samsung has announced that a number of future digital cameras developed by the Korean company will feature mobile TV and movie playback functionality. A company representative is quoted in the Korea Times as saying, “Our DMB [digital multimedia broadcasting] cameras will compete against phones as we will arm them with a screen as large as 3 inches diagonally, much larger than today’s DMB phones at about 2.2 inches.”

It remains to be seen how successful these digicam-PMP (portable multimedia player) hybrids will be, but it certainly is an interesting strategy. Keep in mind that previous attempts, like digicam-MP3 player hybrids, were met with limited success, but using a digital camera (which can record video) to watch video, seems like a more intuitive combination. Expect battery life to be in the neighborhood of 3 hours or so.

Samsung is also reportedly setting a goal to be among the top 3 in the digital camera industry by 2007. This new strategy may prove to be the “it” factor that helps them achieve this very ambitious goal.