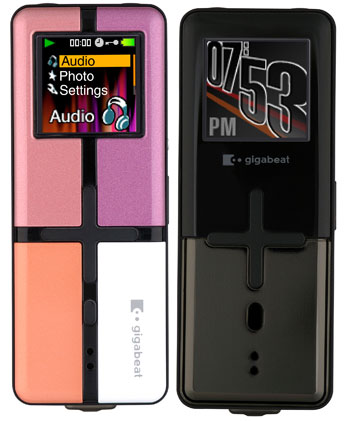 Toshiba’s Gigabeat P5 and P10 flash MP3 players (EP-05FR and MEP-10FK in North America) have entered the market. The Gigabeat P5 unit is a 512MB player, while the P10 is a 1GB MP3 audio player, both however have a stylish and durable design.

Here’s a run down of features for Toshiba’s P-series players.

It is said that with the Gigabeat P5 and P10, Toshiba is targeting the iPod nano market and this may be ‘ok’ but could show a tough battle, the nano is much smaller with a larger storage capacity, but does scratch up very easily. As it is, Toshiba’s Gigabeat P-series are more comparable to those of yesterday’s flash players.

The Gigabeats will be sold for $129 and $179 for the 512MB and 1GB versions respectively in January.